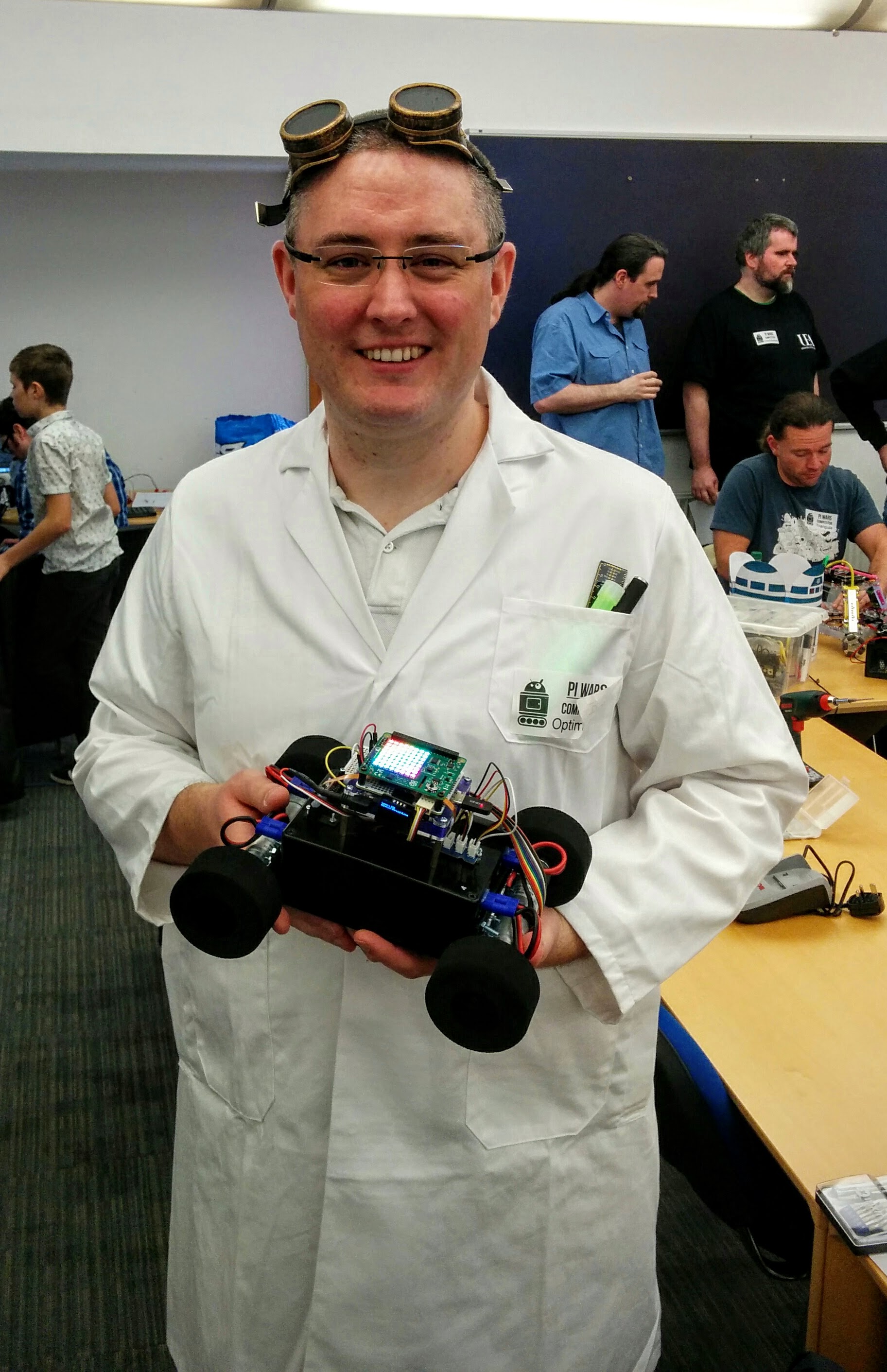 About the team: Leo White – a Software Engineer by profession, and a tinkerer of hardware and robots in his spare time. Utilising fuzzy memories of electronic’s project from my teens, combined with the vast amount of information available on the Internet, I’ve been building robots since I got my first Raspberry Pi back in 2012. Since then my soldering skills have improved, as has my knowledge of motor drivers, LEDs and other bits and bobs.

The 2015 journey: My journey began, as most journeys should, by planning what my robot needed to be able to compete in the various challenges. This involved lots of scribbling on a white board, erasing, rewriting and eventually settling on a plan.

Once I was selected as a PiWars 2015 competitor a quick prototype of the robot was made using plywood and piping, adding on the motors, driver and (most importantly) the Raspberry Pi itself. This gave me a platform for testing code on, sensors and getting an idea of how much space I had to work with to fit into the A4 category.

Over the next few months the design changed and was tweaked as I selected the final motor driver board (the first one proving to be unreliable) and added other components (Such as the newly released SenseHAT). Optmius Pi was also taken to a Raspberry Jam or two and feedback from these events incorporated into the design (Apparently having wheels fall off whilst driving is a bad thing).

Eventually a new chassis was selected (My original plan of building a custom, acrylic chassis being abandoned due to lack of time), everything was squeezed inside and Optimus Pi was finished!

Of course there were a few stumbling blocks along the way, components taking months to arrive, the occasional puff of black smoke, and the Arduino controlling the line follower suddenly becoming unreliable the night before PiWars itself!

A fuller account (with pictures!) can be found on my OptimusPi blog at http://optimuspi.mybigideas.co.uk/

The highlight: The highlight for PiWars 2015 for me would have to be the Pi Noon event. It was a lot of fun to do, and I managed to make it all the way to the final! Which I wasn’t expecting as there were some much bigger and faster robots competing.

Advice for competitors: Try and get an early plan of how you and your robot are going to attempt each of the challenges. It can be as simple as a rough sketch but that should be enough to let you decide what sensors/features you need, which challenges can be attempted using the same features/sensors as another challenge, as well as giving you a rough idea of what your robot may end up looking like.

Test early and often. If there is a sensor you are planning to use then just blu-tak it in place, connect it up via jumper leads and see if it works how you expect it to. If it does then you can move onto attaching it in a better way, if it doesn’t then you haven’t lost hours of work developing something you end up not using.

Next year: Planning on applying for the 2017 event.  Apart from that, it’s a secret! I felt a bit constrained last year by the plastic project box I was fitting the motor driver and batteries in, so for next year I’m thinking of something a bit more flexible. I also ran into issues with the line following sensor last time, so I want to try and get that sorted much much earlier in the design/building phase.

A robot’s eye view of the event: