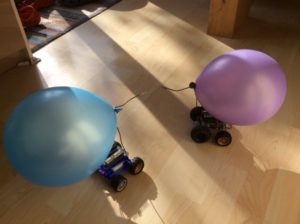 Robots will face off against each other in a non-destructive battle which will test the driving skills of the operator and the manoeuvrability of the robot. Robots will be armed with a pin on the end of a metal wire and must use this pin to burst balloons attached to the other robot.

The contests will take place inside an arena with a short wall around the edge to prevent robots from leaving the arena.

Your robot must be able to hold a wire 2.5mm in diameter, 1cm off the ground. The method of attachment (shown below as the ‘fixing contraption’) can be done with something as simple as gaffer tape.

In the event of neither robot winning outright after 3 minutes, the challenge judge will make a decision based on control and “aggression”.

Intentional damage to another robot will result in disqualification. It is up to the driver of each robot to ensure that no damage is caused.

The decision of the judge is final. Please don’t argue – remember, this is supposed to be fun.

Due to the number of competitors, some robots may receive a ‘bye’ to the next round. This will be at random and announced well in advance of the competition.

12 thoughts on “Pi Noon – the Robot vs Robot Duel”